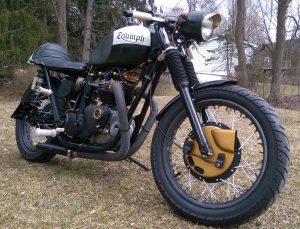 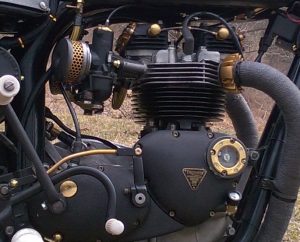 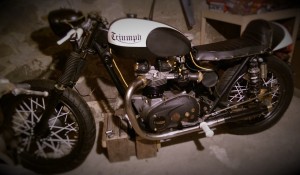 Frame and engine meet for the first time. Just for mockup purposes though. Engine still needs its rebuild to be completed.

Got the title sorted out, in hand, in my name. Thats a big weight off the project and makes me more comfortable spending the money to get the engine done up now. Wish is wasn’t so darn cold that I don’t want to go out to the shed. Think I will wait till my christmas shopping is done before I take it to the engine builder and that give me an excuss to mount it in the frame for the first time and really get an idea of what it is going to look like.

Been back at it a little.  Took an afternoon and tried to take care of the title transfer but stupid DMV rejected it and said they need VIN verification probably because they purged title back in May and are to lazy or stupid to do a web search and verify the vin conforms to Triumph’s system of dating VINs. Need to load it up and get my mechanic to sign off on a form and should be good though. Found a triumph specialist closer to where I live to rebuild the  engine too. Been cataloging my parts and packing things up to take down to him soon.

I’ve written in the past year I promise just haven’t posted. And those random rambling in txt files raw and without edit have probably been lost. So what’s new. The shed is new its not a whole lot bigger but enough that it does make a difference =in being able to work. Its old grungy but through the winter I got insulation and peg board covering all the walls a couple shelves and other organizational niceties mostly improvised. With the bike I have the wheels as tIrue as they are going to get and have been working on getting tire mounted. Destroyed a tube in the process on the first try. My big goal at the moment is to get a roller and finally get the title transfer on the frame complete. I managed to get the brake linkage and stay together for the rear and the tanks and tail paint fixed up after getting knocked around from the move. New helmet was purchased and try to decide if its getting painted to match or leaving as is. Went with the Bell Bullit in white with a bubble shield. I’ll update and add some recent pictures soon.

Have put the breaks on some purchasing. (trying to by a house and a bigger shed/garage for the bike)  I’ve said before how getting a new part often spurs more work. The opposite holds true some times also. But the seat upholstery is now done. I got an inexpensive stock style seat cover and some foam rubber. Little cutting, hand stitching, and brass snaps and it almost looks professional, well from a couple feet away my stitching isn’t exactly perfectly straight but still proud of the outcome. Have also worked out the carb mounting since last post. The amal mk2 flange was little big but a clamp and some silicone tape around the 30mm OKO spigot works good. Need to figure out the jets but will wait on that till engine is rebuilt and I can buy a small assortment and figure it out. Lowbrows customs’ reference sheet on amal to pwk jet comparison should be a big help there. Been repainting quite a bit also. Doing the seat cover I messed up the paint enough it needed to be redone. Tank also had some things I wanted to fix after the inside was sealed. I’m not going to promise to do more posts since I’ve been there before but do promise to keep working on the bike. I always have people ask me when its going to be done. I’ve just tell them I am not putting an estimate on it since I’ve blown through more than one already. But damn I want to ride this thing. Check out new pic in pics section.

Ok not keeping up on the posts but I have been working. I promiss to get some pictures up. Completed the velocity stacks after got some paint on them. Got the gas tank coated with that kit. Worked pretty well but didn’t have enough left over to do the Ducati tank oh well have a good coat on the inside now and the petcock port reducers are turned in all that way. “Made the tread fit. Yes if you have a brass hardware screwing into steel sometimes you can “shave” the tread to fit. Couple small purchases made got one of the tappet blocks, the X fitting for the fuel lines, and picked up some fork oil while I was browsing at the local Harley dealership.  Weathers been nice so will keep trying to get out there. I like when the weather lets me paint.Managed to convert the tail light from a 2wire to a dual filament socket fairly easy actually local auto parts store had a socket that pretty much fit perfect.

Went out last night for little while. Drilled some holes in the rubber gas tank mounts to run some wires through now that I drew out the wiring diagram need to figure out where everything will actually run. Basically have some room in the headlight to stash some electrical parts, can stash some in the back part of the café seat and maybe some stuff in the leather bag under the seat. Also getting ready to use my tank sealer kit. Would love to do the Ducati tank at the same time. Go some gas resistant clear coat to repaint once that’s done also. 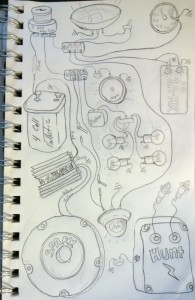 Been doing some cataloging of what parts are need to finish the project guess that although I know its not soon its in sight in some way but I’m not willing to make an estimate. Did a drawing of a wiring diagram to try and help identify what I need there. Going to post on triumphrat.net and see if those guys can tell me where I went wrong. 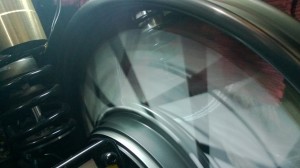 I used to find methodical mundane tasks cathartic. A way to clear your mind and find focus. Wheel truing “should” be this but it just frustrating as all hell. With that said the rear wheel is getting close. I’ve already made the assumption right or wrong the front will be easier. Bottom line, I just want them done with tires on them its a milestone I’ve been waiting for for a long time and will let me move on to so other stuff like fitting the front fender and determining if I want to lower the forks at all.

Actually have been out working once or twice since last post just didn’t come in to write. Got my brass acorns for the out trans cover and primary cover stator bolts they fit perfect. Sometimes getting an order is the best motivation to go out and work. Its been cold lately actually for mid spring, used the heater tonight. Recently got my license plate bracket also. That came together as planned with the outer frame and bolt lights. Parts are getting fewer and fewer but a couple key things still needed before I could take the motor out for building. Headlight bucket is coming together as well and got the speedo pulled apart so I could get the spider cocoon that was under the glass out. I really need to start putting more pictures up to flesh out the site. Also added a “waxing philosophical ” page where I can get off topic more. Hopefully I’ll find time to add there.

Continued on the inner trans cover, have a feeling it will end up getting pulled apart again. Also inventoried and tested head bolts with the new cylinders. Everything worked fine not sure where the washers are but didn’t really look that hard. Gotta remember to charge my phone for going out to work. Could have used lumad to keep from flipping the head studs, yes there is a reason there is 1/4 inch lest thread on one side. Still adjusting to British engineering, their really are different approaches to mechanical construction from culture to culture. Spotted my first big hairy spider this spring in the shed, it got the map gas torch. Wish I knew why that shed is such a hangout for spiders.

Started to put the inner trans cover back together. Actually strait forward but a cross threaded stud and not being clear about gasket and “o” ring are correct slowing me down.

Didn’t get any work time in today. Did some research on parts and bought baffles for mufflers and a set of large sockets hope they fit the cam gears and clutch nut.